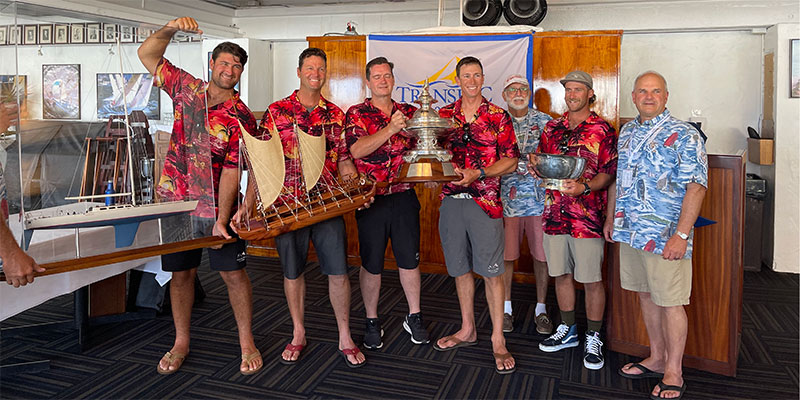 Honolulu, Hawaii – An enduring service provided by the Transpacific Yacht Club is maintaining one of the largest and most impressive perpetual trophy collections in the ocean racing world. Dozens of works of art crafted in silver, pewter, brass and bronze, along with traditional Hawaiian materials like Koa wood, canvas, cord and reeds, have accumulated over the 115 year history of this race, first sailed in 1906.

Deeded by numerous past winners and generous patrons of the race, these trophies are not only stunningly beautiful, they are a visual reminder of the admiration and respect conferred to those who not only complete the 2225-mile course from Los Angeles to Honolulu, but excel in the face of tough competition as well. To be on the podium with your team at the Transpac awards thus makes you part of ocean racing history.

In lieu of the normal Awards Ceremony gala held for all crews at the end of the event, this year awards were conferred in three separate and smaller ceremonies for the top three teams in each race division, along with special trophies that pertain to entries in those divisions. Today this was done for the corrected time victors in Divisions 3, 4, 5 and 6, with these being, respectively: Chris Sheehan’s Pac 52 Warrior Won winning the Albert Soiland Trophy; Jack Jennings Santa Cruz 70 Pied Piper winning the Los Angeles YC Trophy; Bob Pethick’s Roger 46 Bretwalda3 winning the TPYC Cup; and John Shulze’s Santa Cruz 50 Horizon winning the City of Long Beach Trophy – all are creations in heavy cast bronze.

TPYC also recognizes the historic importance of navigators in this race, so each winning team’s navigator was also presented with an award. And in recognition of how the weather may change between race start dates, awards were also given for corrected time excellence among several divisions in the same start date. For the groups who started on Friday, July 16th, the winner in corrected time of the Morgan Adams Memorial Trophy is Bretwalda3.

Three other awards were presented that represent outstanding achievement: the First to Finish Merlin Trophy awarded to Warrior Won who was the first to finish without use of non-manual power systems. The King Kalakaua Trophy was also awarded to Warrior Won for being first to finish in corrected time, and a sentimental favorite, the Don Vaughn Trophy, given to the most valuable crew member on the overall winning team as voted by the crew. This was awarded to Collin Leon, the boat captain on Warrior Won, for his outstanding work in organizing the program – the boat, the crew and all the complex logistics for this East Coast-based team – to help produce their outstanding results and an impressive trophy haul for one team.

“I’m humbled to accept this,” said a modest Leon. “This team was outstanding to work and sail with, and our skipper Chris [Sheehan] has throughout been a strong motivating force to inspire everyone to dig deep to get the very best.

“The Transpac is so special,” said Leon. “Even with a team that has been on some of the toughest races in the world, everyone loved this race.”

Next for Warrior Won is for Leon to dissemble the boat to ship to San Diego on Paisha Hawaii, where it will be trucked to Florida in anticipation of a winter season of training and racing starting in November, with a long-term tour expected of other ocean races around the planet.

The beaming smiles of this team on the dais with their armfuls of trophies said it all.

From the Transpac site: https://transpacyc.com/news/article/transpac-trophy-haul-for-warrior-won

Building your own watermaker