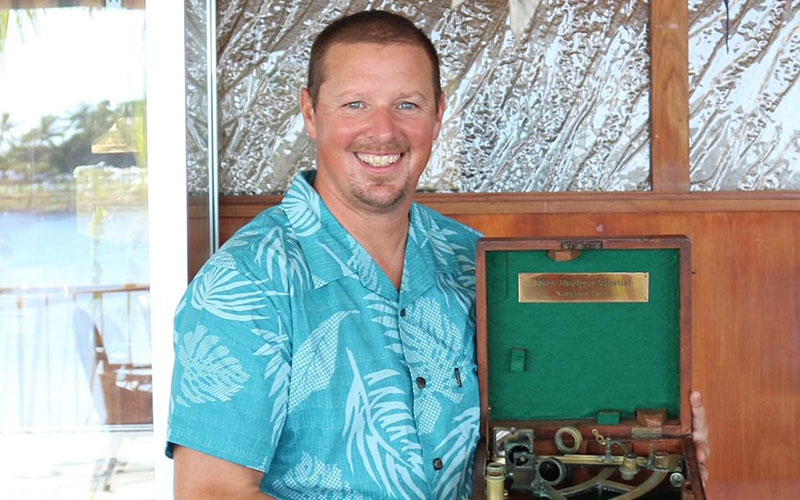 August 20, 2021 – Honolulu, Hawaii – After careful review of the materials submitted to support his application, a review panel from the Transpacific Yacht Club have determined that Jesse Osborn wins the Mark S. Rudiger Celestial Navigation Trophy for the recently completed 2021 Transpac. Osborn was navigator aboard Justin Waite’s Stevens 47 Mikmaks.

The trophy is awarded to the navigator who submits celestial navigation worksheets or evidence of traditional navigation to the finish inspectors immediately after finishing, and whose work is selected as the “best” by an impartial panel of judges. First awarded in 2011, the trophy itself is an antique brass 1905 T. Hemsley & Son silver-vernier A-frame sextant, donated by Stan Honey, which receives plaques for each winner.

Ocean Navigator is for voyagers, both power and sail, who want to know more about their boats, their gear, and the techniques to make them better voyagers. Whether crossing oceans or making coastwise passages, Ocean Navigator will help inform and inspire. Their editorial offices are located in Portland, Maine, but they cover voyaging topics for sailors and power voyagers from the Southern Ocean to the North Sea, from the South Pacific atolls to rocky coasts and the Great Lakes. Every issue features topics that inform and inspire those who chose to go out of sight of land.

From electronics to Maintenance, navigation and voyage planning, Ocean Navigator provides original content to keep our readers educated and entertained.

First organized by the Transpacific Yacht Club (TPYC) in 1906, the Transpacific Yacht Race or Transpac is an offshore sailing race from Point Fermin in Los Angeles to Diamond Head, just east of Honolulu, a distance of 2225 miles. This is among the world’s great ocean races, and biennially attracts some of the world’s fastest sailing yachts, some of its most talented offshore racing sailors, and a wide variety of offshore sailing adventurers.

Transpacific YC also conducts occasional races to Papeete, Tahiti, with the next Transpac Tahiti Race scheduled for 2022. Membership to TPYC is open to all sailors who have completed a TPYC race to either of these destinations in paradise. This club is also a founding member of the Offshore Racing Association and its races are sailed under its Offshore Rule, ORR.