Fathers and Sons in Transpac 2021

Honolulu, Hawaii – By now the stories of massive waves, sustained high speeds, and record runs coming into the docks at this year’s Transpac are starting to sound routine. This year’s race was epic, everyone agrees, thanks to a perfect weather scenario allowing for sustained high-speed sailing. Teams came in a day ahead of their hotel bookings and thus hung out at the bars of the Waikiki and Hawaii Yacht Clubs, enjoy terra firma and strong doses of Hawaiian hospitality poured into pineapples. 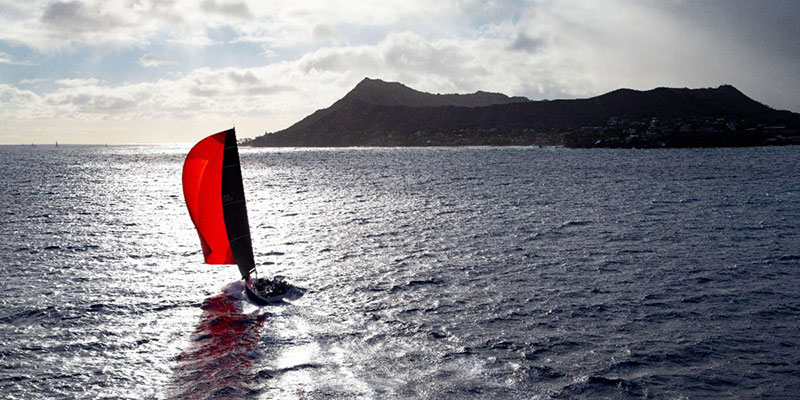 Yet another common them emerged as well: the strong interest in preserving the interest and opportunity to share the thrills of this race into future generations. Just as many did when they were kids, they are now having kids of their own and want to share this experience and pass on the lessons learned in offshore racing: how preparation, perseverance, camaraderie and teamwork can lead to success.

Several entries this years, even class winners whose crew lists were peppered with pro sailors, had father-son pairs on board, some even with multiple sons. Most sons stood a watch with their dads but were fully integrated into the team, fighting through the same challenges of doing their jobs in an ever-changing dynamic struggle with physical exertion, mental focus, and ever-present spray.

Among the sons there was a diversity of opinions: the newbies were thrilled to be ashore but also appreciative of the experience. Michael Dahl is a 20-something who sailed with his brother Sean and his dad David, a partner in the Andrews 77 Compadres team from Newport Beach. He had a background in dinghy sailing in college, but not much offshore experience…until now.

“This was an outstanding experience,” he said. “Everything was going great, we thought this was going to be an easy race. Then the pin in the vang broke and it went downhill from there. I had not realized how one failure can lead to others so easily.”

The vang failure not only made it difficult to gybe, but the sail chafing on the spar then caused the mainsail to break, which in turn made it difficult to pull down – this is a big operation on a boom 35 feet long with a spar 3 times higher. Throw in 20-25 knots of wind in big seas and the effort becomes gargantuan.

Michael, Sean and David shared a watch, and in these tough circumstances found they got along well on board, “maybe better than on shore.”

The same opinion was expressed by another father and two-son team: John Sangmeister and his twin sons Jack and Peter. This was the younger Sangmeister’s first trip too, and they all stood a watch on their Andrews 68 Rock ‘n Roll that John co-skippered with Justin Smart. Jack said he enjoyed sailing with his dad, but often they did get along better at sea than at home. 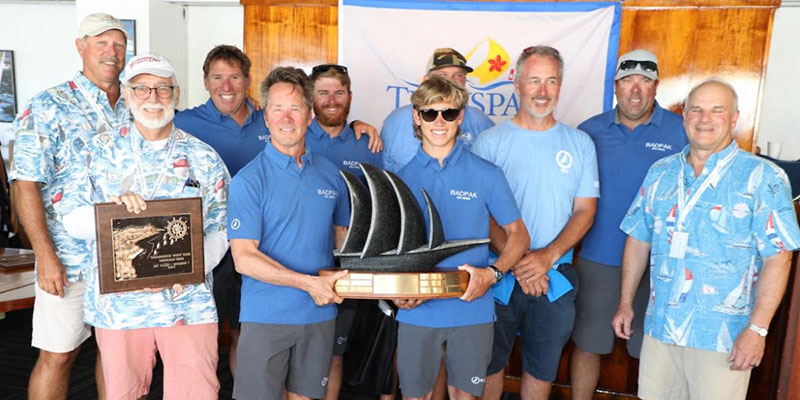 Sixteen-year old Kelly Holthus said the same about he and his dad Tom, whoe is the owner/skipper of the Botin 56 Bad Pak. “On the boat we know what we’re doing and he does not have to tell me what to do, unlike at home,” he said. It’s no wonder: this was Kelly’s third Transpac since first racing with his dad’s Pac 52 of the same name 4 years ago, and being at age 12 part of a class-winning team, just as they were this year in Division 1.

The difference was this time he had a more serious role on the boat. “I was on the mid-bow helping forward,” no small feat on a 56-foot boat hurtling over and through waves and spray. “I also trimmed and did other jobs, and learned a lot on this trip.”

Was Dad worried about safety? “Yes, always,” admitted Tom. “It’s my greatest fear to lose someone overboard, anyone including my son, so we all have the same safety protocols of wearing a harness and clipping on to the boat.”

And while the Botin 56 was not as small and light as his old Pac 52 – which now as Chris Sheehan’s Warrior Won is projected to be the overall champion in this year’s race – the team still endured plenty of adversity on the trip, such as loss of power for a while until troubleshooting water damage lead to a cure. On a boat with powered winches this was a serious problem for a while, and one that leads to more lessons for a young ocean racer. 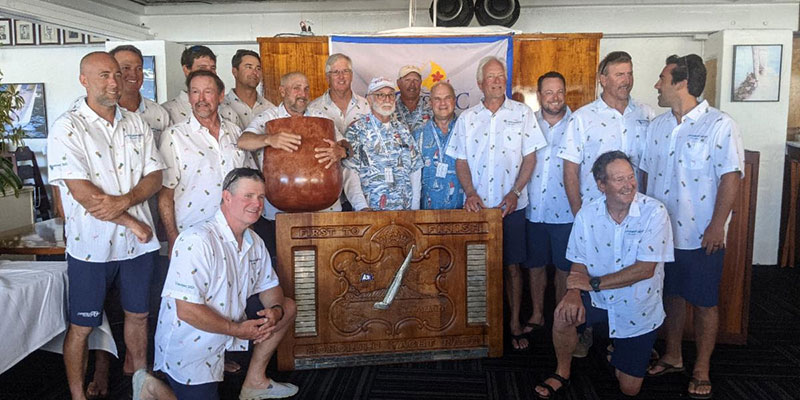 There were many other father-son pairs on the Transpac course this year, such as Bart and Brett Scott on Compadres, Jay and Joe Crum on Raymond Paul’s Botin 65 Artemis, and Artemis boat captain Carlos Badell racing with his son Delmar, who does the bow. Yet Carlos is less worried about his son on the bow than Holthus of his: “Delmar is 50 this year,” said Carlos. “I got started early…”

Proof that father-son sailing can be a long-term commitment in this great sport. And its not only sons, but daughters can play this game too: 14 year-old Gray Hemans sailed with her father Chris on his DK 46 Varuna in the 2017 Transpac.

In the first of three daily awards sessions, the top-three places in Divisions 1 and 2 were awarded, going to Bad Pak for Division 1 and Doug Baker’s Kernan 68 Peligroso for Division 2. The first-to-finish monohull Barn Door Trophy was also presented to Roy Disney and his team on their turbo Volvo 70 Pyewacket.

Only ten boats remain on the course at sunset today, with most expected into Ala Wai harbor in the next 24 hours. The trade winds remain brisk and steady so all should have the same strong finish enjoyed by the rest of the fleet.

Seahorse Magazine’s Dobbs Davis latest race analysis video explains how the winds swirl around the Hawaiian islands based on topography, and how this affects their final approach experience into the finish. This video is at this link:  https://youtu.be/jOk8wbNwE0c.

From the Transpac site: https://transpacyc.com/news/article/father-son-sailing-and-division-1-and-2-winners-crowned-at-transpac

Building your own watermaker